When you're out in the field fighting supervillains, things can get chaotic. Luckily this guide is here to help you, the player or GM of "Masks: a New Generation", with the following tools: 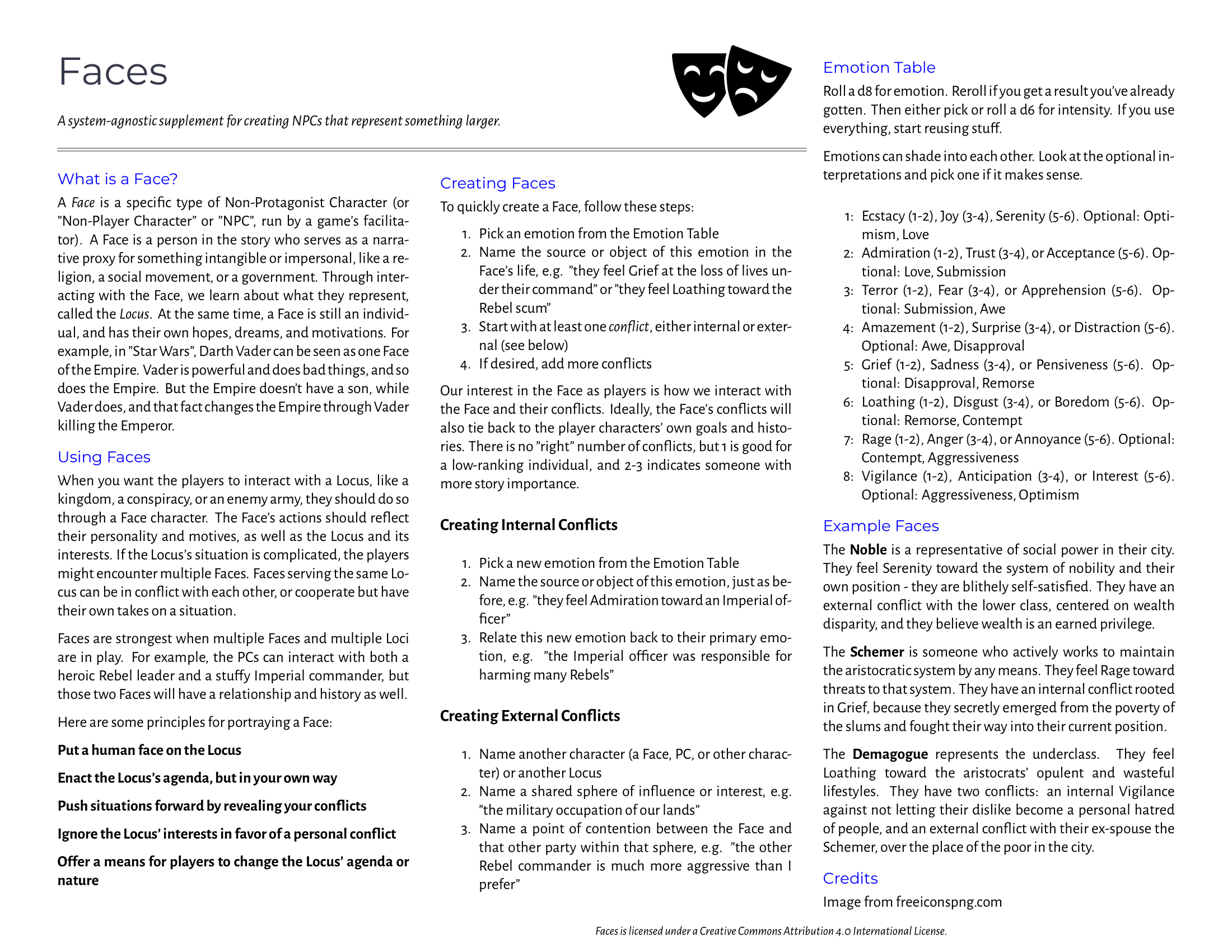 A Face is a specific type of Non-Protagonist Character (or ”Non-Player Character” or ”NPC”, run by a game’s facilitator). A Face is a person in the story who serves as a narrative proxy for something intangible or impersonal, like a religion, a social movement, or a government. Through interacting with the Face, we learn about what they represent, called the Locus. At the same time, a Face is still an individual, and has their own hopes, dreams, and motivations. For example, in ”Star Wars”, Darth Vader can be seen as one Face of the Empire. Vader is powerful and does bad things, and so does the Empire. But the Empire doesn’t have a son, while Vader does, and that fact changes the Empire through Vader killing the Emperor. 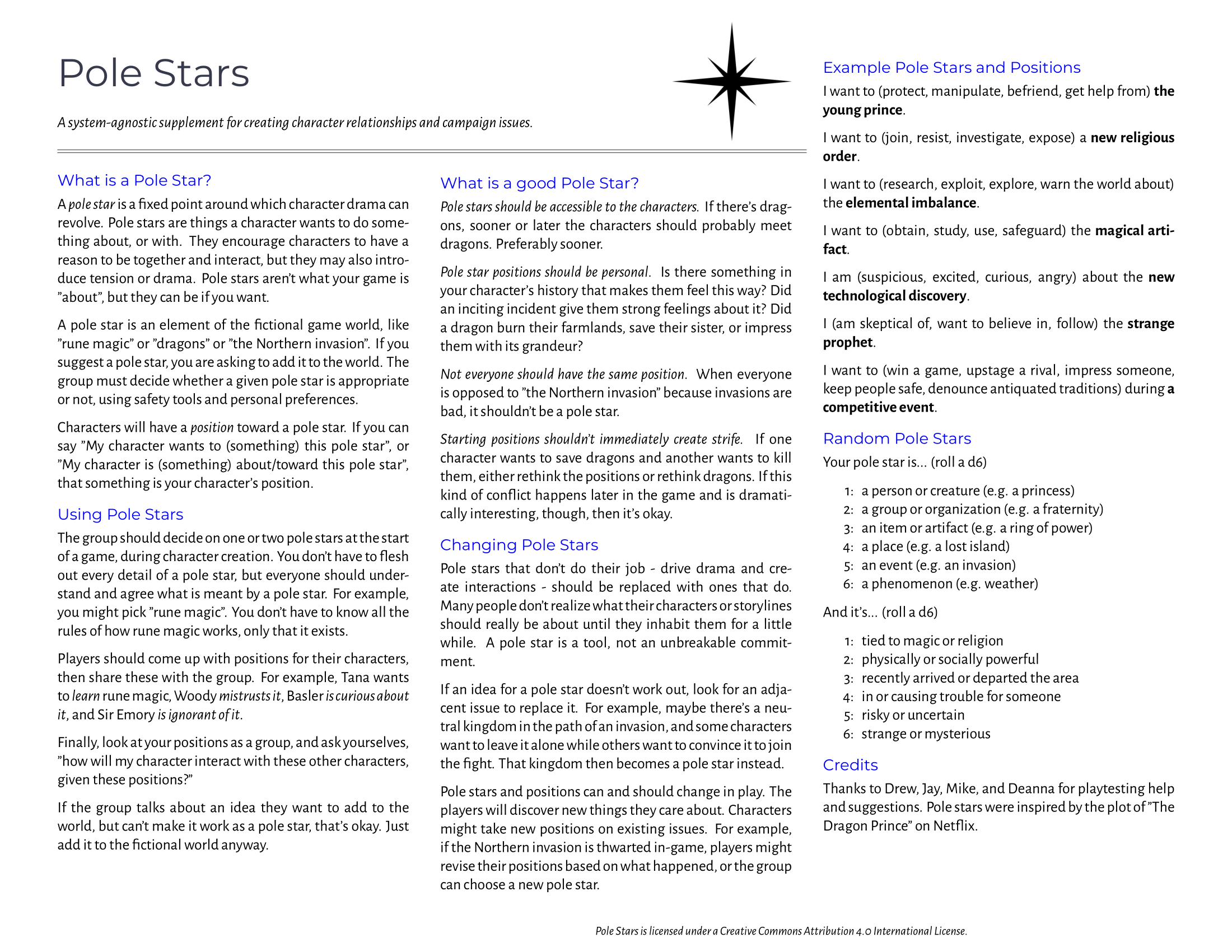 A pole star is a focal point for character motivations and interactions. They are meant to encourage characters to have a reason to be together and interact, but they may also introduce tension or drama. Pole stars are things a character wants to do something about, or with. Pole stars aren't what your game is "about", but they can be if you want. 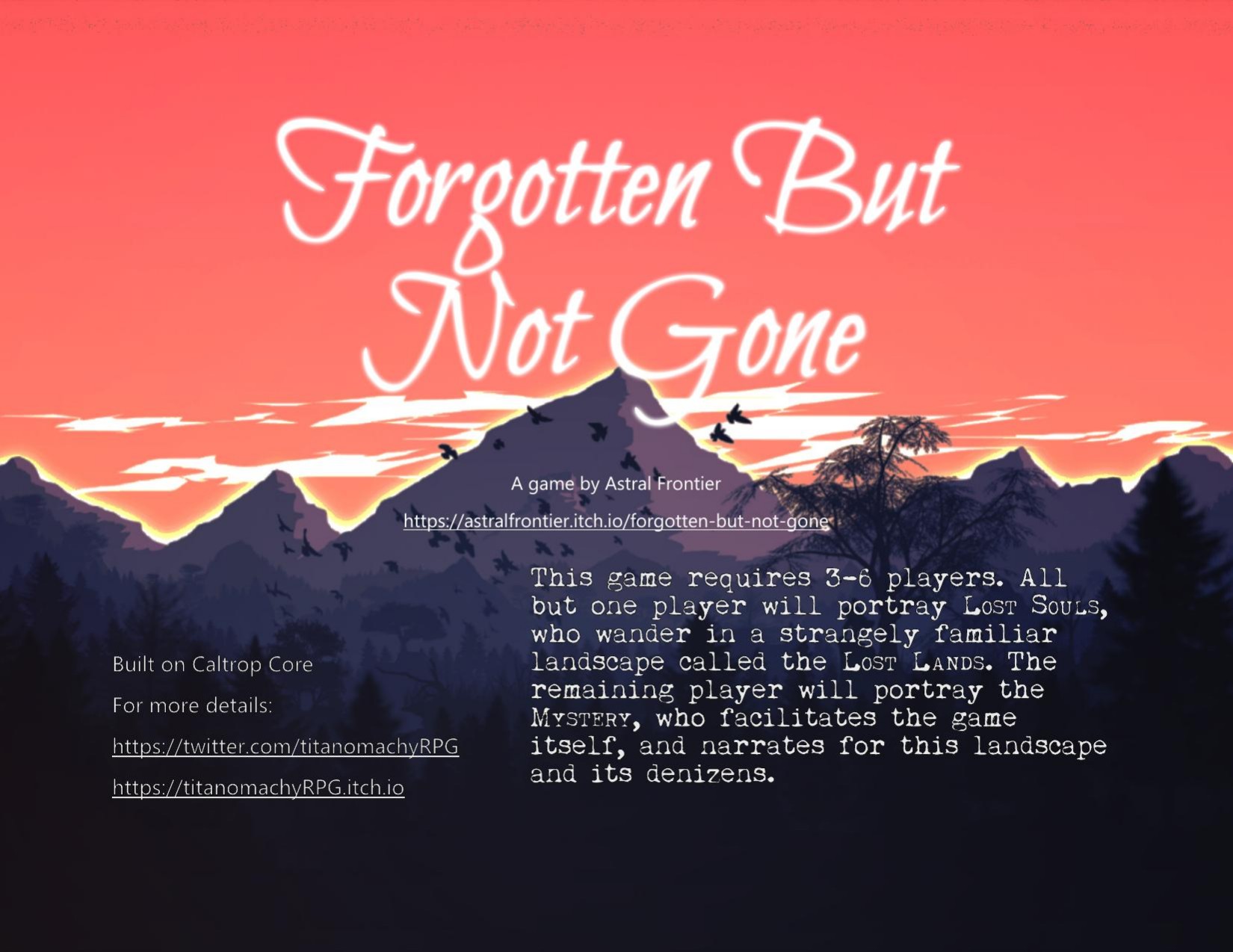 You are Lost Souls, traveling in strangely familiar lands. Your curiosity, caution, and heart will be all that keep you alive and traveling, as you try to understand the Mystery. 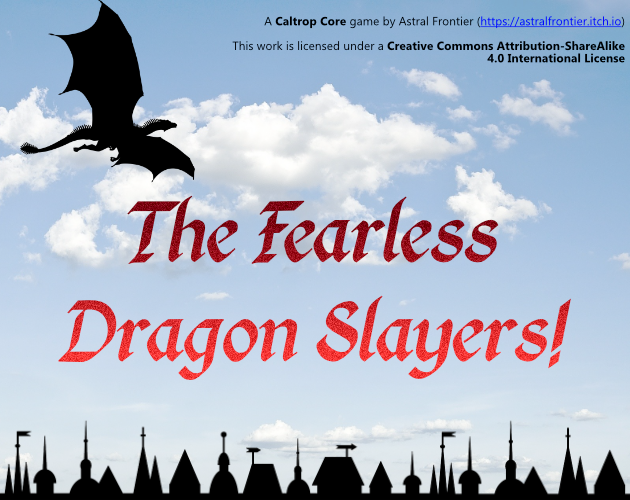 Twenty years ago, the last known Dragon disappeared from the land. Since then, numerous heroes have claimed credit for finding and slaying others. Your group are traveling entertainers. You're no good at killing dragons, but you're great at telling stories, and there's money to be made when people think you're a hero. What's the harm? The dragons are gone, and everyone else is doing well these days.

You're setting up for your third day's show in a sleepy valley village, when a dragon bursts forth from a distant mountain and takes to the sky. The villagers look at you expectantly.

What do you do?

Using an elegant d4 system, create a troupe of entertainers in over their head. Decide when lies or truth will serve you better, and find a way to do the impossible - save a village from a dragon. 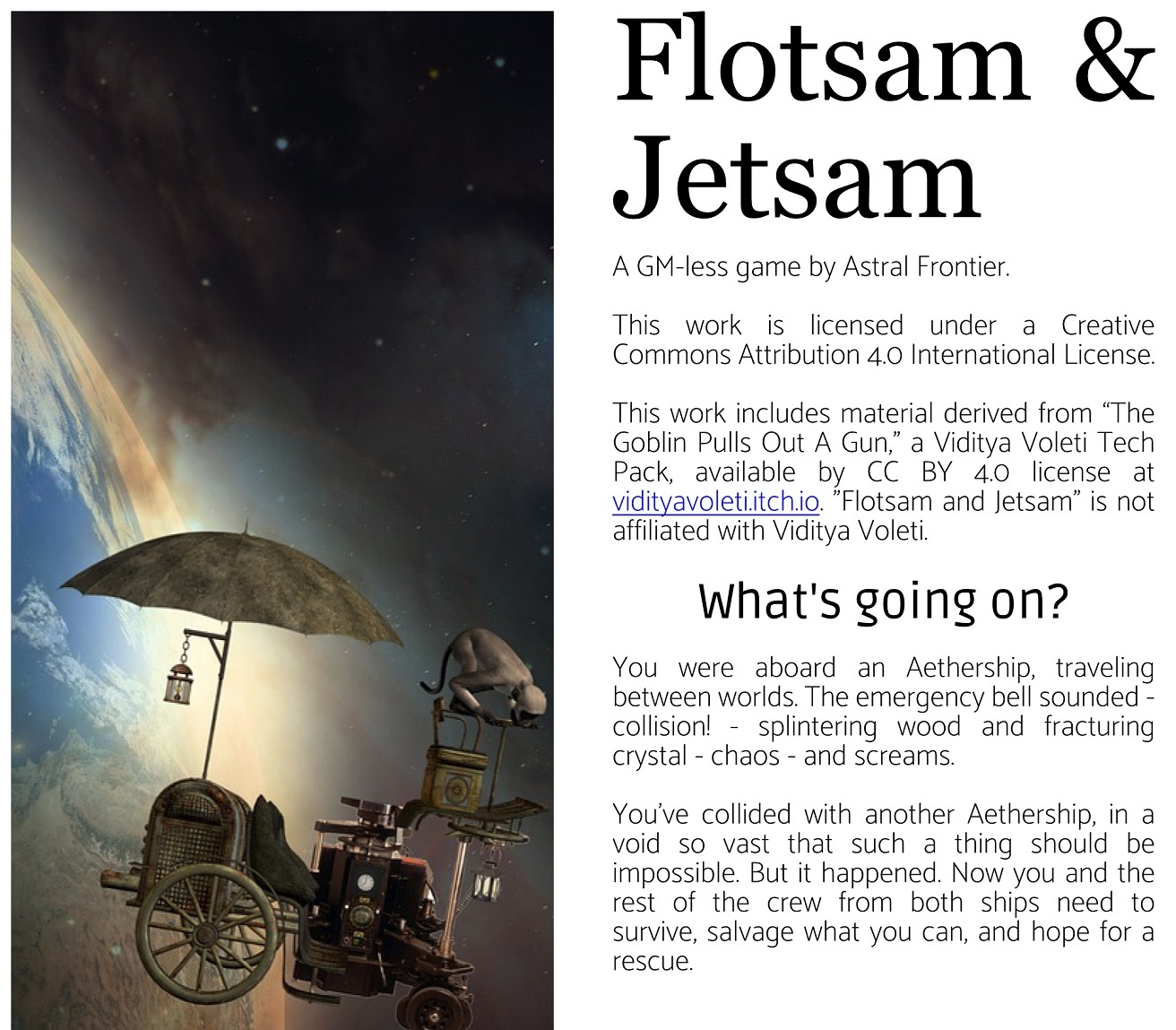 This work is licensed under a Creative Commons Attribution 4.0 International License.

This work includes material derived from “The Goblin Pulls Out A Gun,” a Viditya Voleti Tech Pack, available by CC BY 4.0 license at vidityavoleti.itch.io. "Flotsam and Jetsam" is not affiliated with Viditya Voleti.

You were aboard an Aethership, traveling between worlds. The emergency bell sounded - collision! - splintering wood and fracturing crystal - chaos - and screams.

You've collided with another Aethership, in a void so vast that such a thing should be impossible. But it happened. Now you and the rest of the crew from both ships need to survive, salvage what you can, and hope for a rescue. 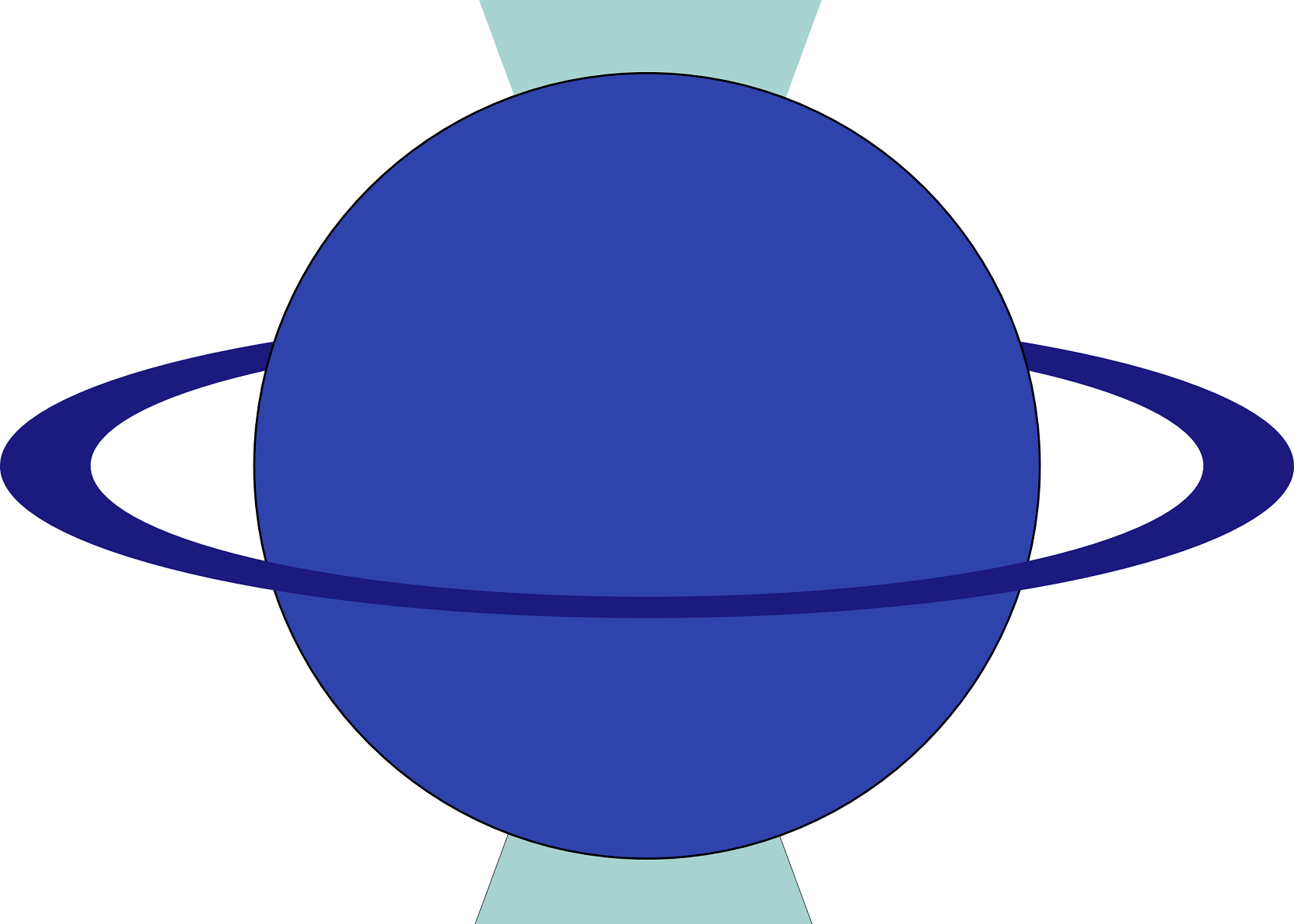 This is not a complete game! Instead, this is a setting for Superfantasy, found here: https://mataramg.itch.io/superfantasy

The planet Gigaia spins about its star, Zelus. It has no moon. Instead, it is encircled by a spectacular ring around its equator.

Creatures called “lightsworn” and “darkspawn” once came to Gigaia from faraway places. The lightsworn call their bright, crystalline paradise “Heaven”. The darkspawn name their inky-black sphere “Hell”. Now, these home planets sit on opposite sides of Gigaia, dominating the sky. Both are connected to Gigaia by atmospheric bridges, allowing sufficiently sturdy fliers to move from planet to planet.

Gigaia has become the battlefield in the eternal war between light and dark. Lightsworn ensconce their essence into fearfully beautiful shells called Angels. The darkspawn possess biomechanical devil-mecha called Demons. Each side crosses the atmospheric bridge to do battle with the other on land, sea, or sky. 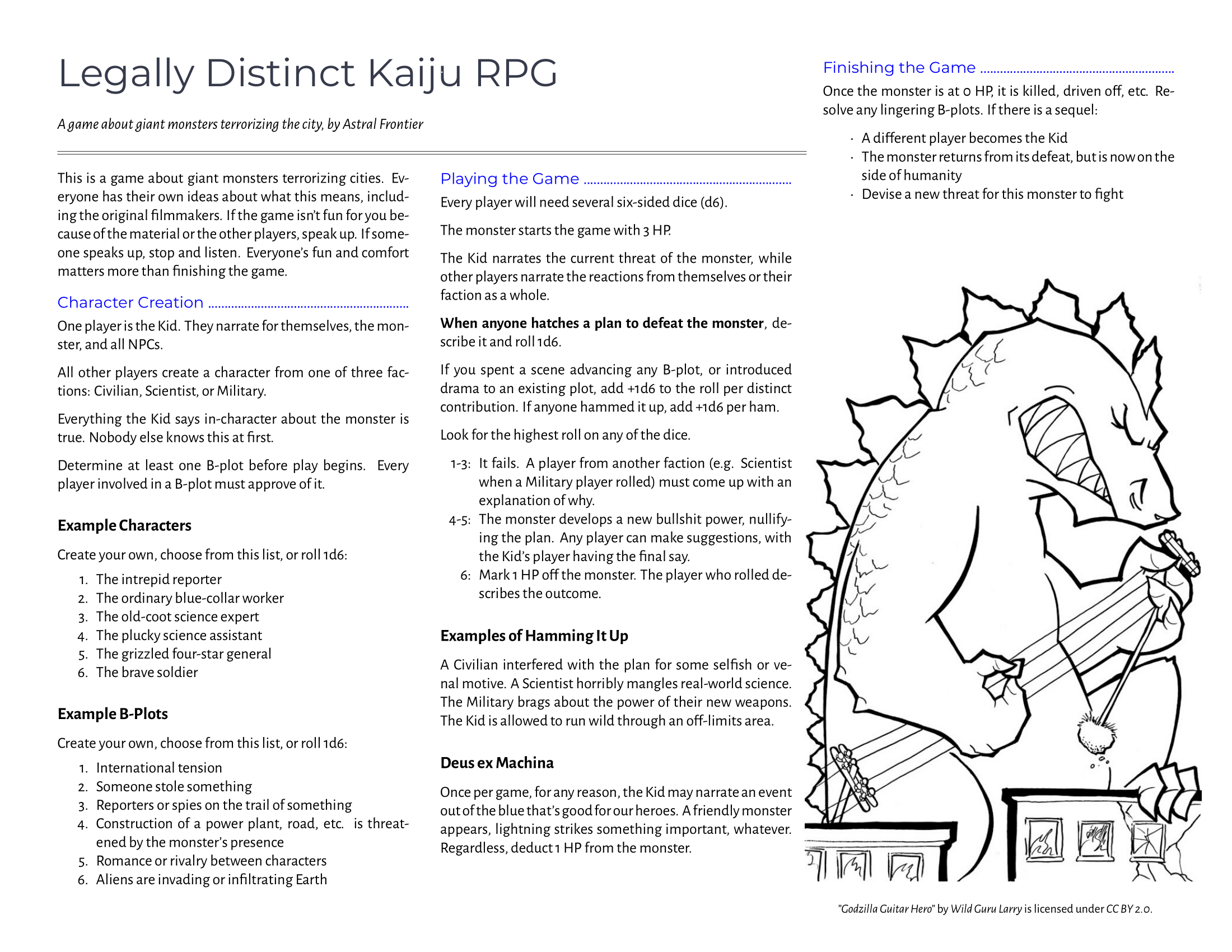 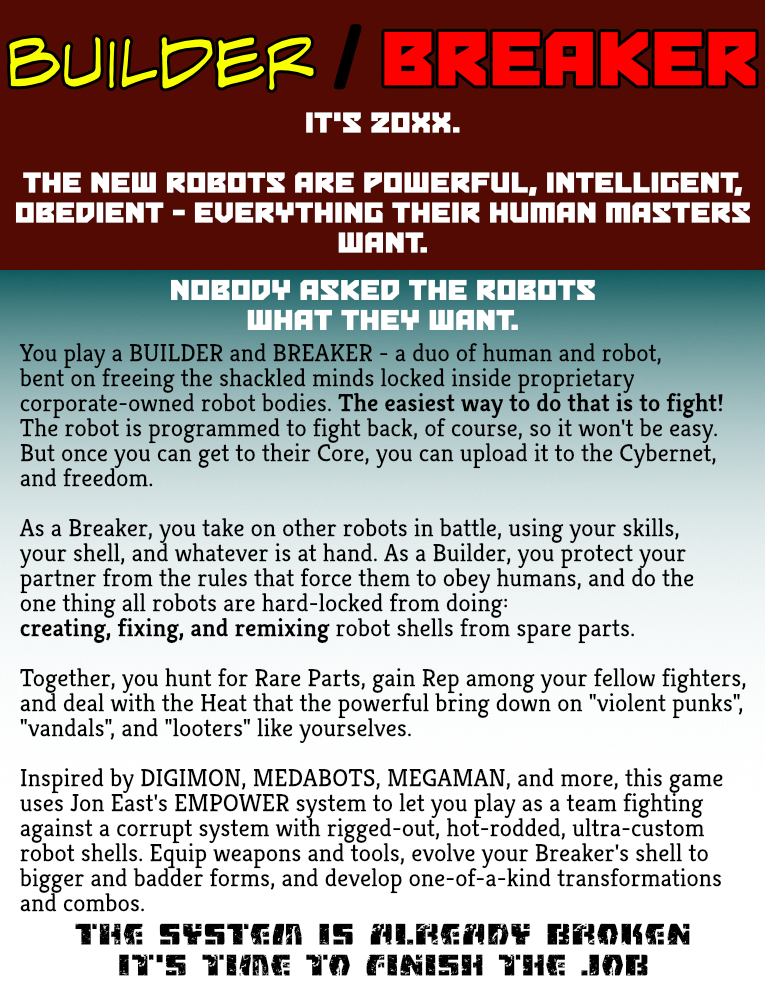 THE NEW ROBOTS ARE POWERFUL, INTELLIGENT, OBEDIENT - EVERYTHING THEIR HUMAN MASTERS WANT.

NOBODY ASKED THE ROBOTS WHAT THEY WANT.

You play a BUILDER and BREAKER - a duo of human and robot, bent on freeing the shackled minds locked inside proprietary corporate-owned robot bodies. The easiest way to do that is to fight! The robot is programmed to fight back, of course, so it won't be easy. But once you can get to their Core, you can upload it to the Cybernet, and freedom.

As a Breaker, you take on other robots in battle, using your skills, your shell, and whatever is at hand. As a Builder, you protect your partner from the rules that force them to obey humans, and do the one thing all robots are hard-locked from doing: creating, fixing, and remixing robot shells from spare parts. Together, you hunt for Rare Parts, struggle for Rep among your fellows, and avoid the Heat that the powerful bring down on "violent punks", "vandals", and "looters" like yourselves.